Home » About LISEF, Inc. » Our History 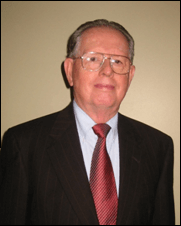 In the early 1980s, Col. Charles Duggan (pictured, left) moved to Long Island and realized that scientific research pursuits at regional high schools were not being encouraged.  Having a familiarity with the International Science & Engineering Fair (ISEF) from his time in St. Louis, Col. Duggan began lobbying for an affiliated fair in our region. In 1985, he applied for a 1986 affiliated fair for Long Island encompassing Nassau and Suffolk counties; the Long Island Science Symposium, held at Long Island University’s C. W. Post campus, attracted 28 participants from 10 high schools competing in 4 categories; two finalists were selected for the 37th ISEF.  LISEF expanded to include 2 affiliated fairs the following year.  The symposium remained at C. W. Post through the 1989 fair then moved to SUNY Stony Brook for the 1990 fair and was renamed the Long Island Science & Engineering Fair (LISEF).

In 1993, LISEF obtained two additional ISEF affiliated franchises allowing the organization to sponsor 8 students to the International competition.  In 1995, corporation papers were filed in the name of LI Science and Engineering Fair, Inc. with bylaws that defined a broader purpose that allows LISEF, Inc. to provide opportunities in the sciences beyond the fair itself.  The first trustees were: Charles Duggan, President, Albert Carlson, Vice President and Edna Zemanian, Secretary-Treasurer.  LISEF expanded again in 1996, increasing to 9 categories and 90 participants.  In addition, Melanie Krieger, a trustee at the time, organized a one-day team fair; 19 teams from 2 high schools participated with 4 teams, subsidized by the local school districts, selected to attend ISEF.

LISEF, Inc. became a 501c3 not-for-profit organization in 2000.  By that time we were supporting competition in 14 categories (140 students) and a team competition, which had grown tremendously; the fair, to accommodate the increased participation, became a 2 day competition.

In 2000, we began sponsoring the Discovery Fair, an affiliated fair for middle school students. In the fall of 2002 we sponsored our first professional development day to provide education and assistance to all science, math and social science research teachers on Long Island.  In 2003, we started an incentive program for schools entering LISEF for the first time by allowing them 1 free project.  In 2005, we added a Proposal Fair, which morphed into a full-fledged Junior Varsity Fair in 2011.

In the current year 2012, 533 students from 70 high schools competed with 434 projects in the LISEF Fair; the JV Fair and the Middle School Fair are still growing and we need to encourage more schools to participate. The JV Fair was up to 125 students from 22 schools.  The number of schools and students wanting to compete in LISEF has grown so much that we must now limit the number of projects that a school can bring; the constraints are due to space limitations and the difficulty of obtaining enough qualified judges.

Col. Charles Duggan retired as a trustee of LISEF, Inc. in June 2000; we have honored his immense contribution to the science research community by renaming our LISEF fair in his honor.